The Ghent University Choir was founded in the beginning of the academic year 2000-2001 by some students, who started a journey throughout the world of choral music. The actual launch as ‘university’ choir came in the wake of the VTK-VRG band, now the Ghent University Symphony Orchestra (GUSO). End of 2001 Joris Derder joined the GUK as conductor and the pathway was open to growth. Now, 17 years later, the choir consists of about 90 students and doctoral students from a wide range of disciplines.

In addition to the concerts in own management, the Ghent University Choir graces various solemn proclamations, academic sessions and conferences and participates in the provincial tournaments of the federation ‘Koor en Stem’. In February 2013, the GUK was rewarded a place in the category of excellence (with prominence). 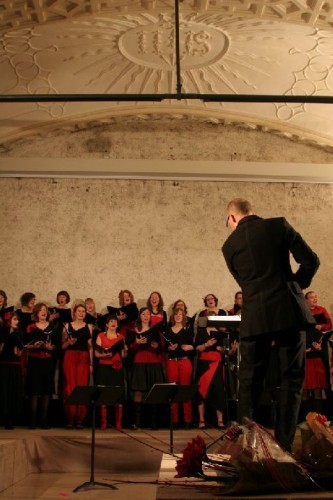 The GUK also travels each year on foreign concert tour. It already had concerts in Hungary, Great Britain, Denmark, Poland, Spain, Italy and Austria. But they don’t only keep to Europe. In the summer of 2013 the GUK on concert tour payed a visit to New York! A gold medal was awarded at the International Youth Music Festival at Bratislava in 2015.

The repertoire of the GUK ranges from the early Renaissance polyphony on baroque and romantic works of 21th-century choral literature, with an emphasis on the contemporary classical repertoire and Belgian music. The GUK regularly dares to set up big projects such as Dido and Aeneas by Purcell, Requiems by Fauré and Verdi or the oratorium A Child of Our Time by Tippett.
To celebrate its 10th anniversary in May 2010, the GUK introduced the Carmina Burana by Carl Orff. In October of the same year they were asked, along with the choirs of the Association of the Ghent University, to perform Carmina Burana once again for the Festival of Flanders. Late April and early May 2011, together with Kantilene Aalst, they brought Fauré ’s Requiem. At the end 2014 the choir joined the international project 1000 Voices for Peace, in remembrance of World War I. In 2017, the GUK collaborated with all Ghent University Music Ensembles for the 200th anniversary of Ghent University, performing at the biggest concert halls in Belgium for thousands of people.

Do you like to sing?
If you like singing and you want to become a part of the GUK, you can contact us and present yourself as a candidate by completing the form at https://gentsuniversitairkoor.be/meezingen/inschrijven/.

We’ll give you a notice whenever new open rehearsals and voice trials are scheduled, which is normally at the beginning of each semester. We rehearse every Tuesday of the academic year from 19:45 till 22:00. Concerts are given at the end of every semester.